After putting some thought into it I decided that one of my old takes on a fantasy Europe would be the best way to approach Yggsburgh and the world around it. In the first volume of Castle Zagyg the East mark is described as somewhat English in nature and this was something that I felt was a good jumping off point.

So, doing a search for a map of the British Isles and making some changes to it I came up with a rough map of the area I will be running the campaign in. While it is mainly a rough area map it gives me an idea of where certain countries and domains would be. As well it allows me to decide on where Yggsburgh and its area would be located. 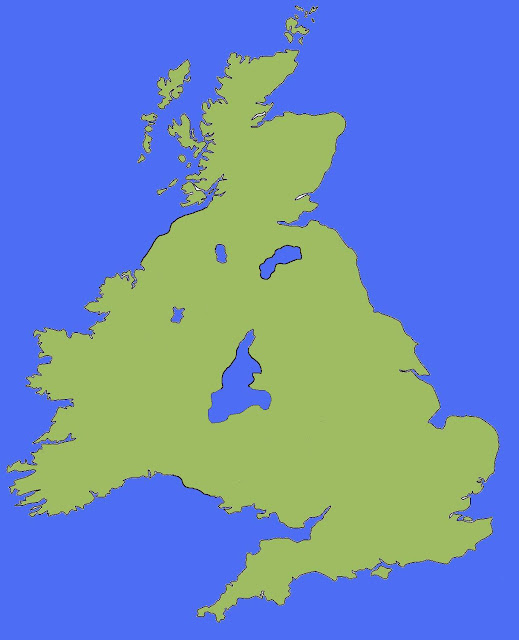 As for the countries many will still be in the same place. England, Ireland, Scotland and Wales all remain in their current locations. However the a fifth country, Calontir, sits in the area that was once ocean and forms the main campaign area. This will be where I place Yggsburgh and the other areas I will develop for that part of the world.

I am also going to be bringing in material from Codex Celtarium and Codex Nordica into the setting as well as borrowing ideas from the old historical series from TSR. This will help flesh a few more things out and hopefully create a nice backdrop for the campaign. Of course history and such is not set at this point but having a good base helps when I get to the point of overall history.

As for the map itself, I am going to be trying to use GIMP to edit the map and hopefully make it more presentable and functional. As it is now, the map is a good starting place for the new campaign and hopefully the beginning of something bigger.